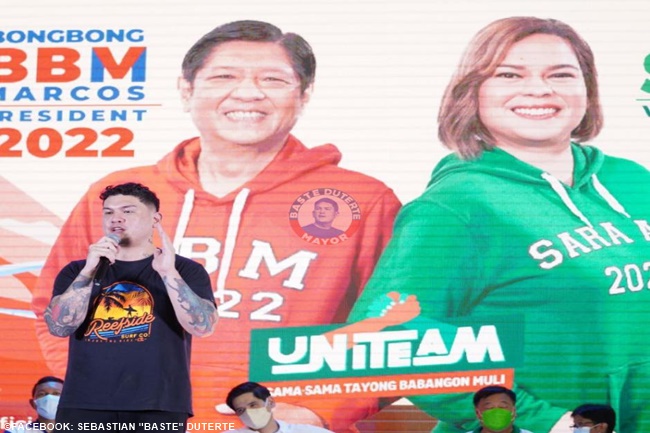 He was referring to the PDP-Laban’s (Cusi wing) recent endorsement of the presidential candidacy of Marcos.

Marcos’ running mate in the May 2022 polls is Mayor Sara.

Asked if he would prefer that their president-dad endorse Partido Federal ng Pilipinas (PFP) standard-bearer Marcos, Baste answered, “Of course.”

The vice mayor said that Marcos, who hails from way up north in Ilocos Norte, is actually dominating the surveys in Davao.

“As far as  I know sa Davao mataas talaga siya. More than 80 percent, 85 percent. We’re trying to push for 90,” said Baste, who represented Mayor Sara during the UniTeam rally here where he received a rockstar treatment like Marcos from thousands of UniTeam supporters.

The audience gave a warm welcome not only to Marcos and Baste Duterte but to the UniTeam senatorial slate members who showed up that include Mark Villar, Herbert Bautista, Gibo Teodoro, Jinggoy Estrada, Rodante Marcoleta, Larry Gadon, and Migz Zubiri.

Tamayo, PFP president, made clear in his speech what is at stake in the upcoming elections.

Before the Polomolok rally, Marcos greeted with the warmest welcome by the people during the mini rally at General Santos City Hall .