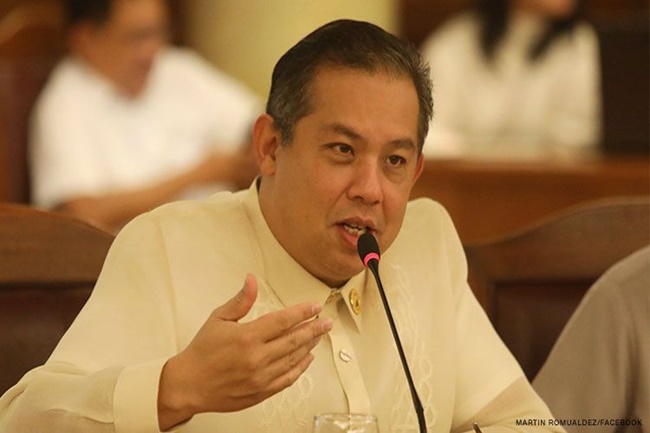 “My kasimanwas (countrymen), a brighter future awaits all of us. Our new President and Vice President share with us our dream of a better generation for our children. Not only here in Tacloban and Eastern Visayas, but in all parts of the country,” Romualdez said in his inaugural address witnessed by Duterte.

Romualdez made the remarks after his ceremonial oath-taking at the Remedios T. Romualdez Medical Foundation Gymnasium in Calanipawan Road here as representative of Leyte’s first district.

He took his oath before Brgy. 109-A Chairman Rodolfo Padillo. Romualdez had no opponent in the recent elections.

In his speech, Romualdez highlighted the challenges the Marcos administration would face.

Romualdez said the biggest challenge would be reducing poverty through the attainment of inclusive growth.

“Inclusive growth. Dapat pakinabangan ng lahat ang biyaya ng pag-unlad. That is what we aim for in Tacloban and even in the whole of Eastern Visayas in the next three years under my next term as your Representative in the 19th Congress,” Romualdez said.

He added that achieving such a goal may be a “tall order,” given that inflation is rising, the budget deficit is widening and the global economic outlook is bleak.

“But the election of dynamic and compassionate leaders at the highest levels of government gives us all hope of a brighter future,” Romualdez stressed.

“For the first time since 1986, we have elected a majority President in the person of Ferdinand ‘Bongbong’ Marcos, Jr. The overwhelming mandate that he received from the Filipino voters will surely help him steer the nation in the direction that we all desire – one that is anchored on his message of unity and his vision of Filipino nationhood,” he added.

The House leader pointed out that the nation also elected “a young Vice President, Sara Duterte, who is known for her strong conviction and compassionate leadership.”

“Her tenacity in demanding quality service from public servants of Davao City is known— a legend of its own— not only in the region but in other parts of the country. Her concern for the welfare of the poor and the marginalized lies at the core of her character, guiding all her decisions as the city’s top executive. I have no doubt that she will serve as the best Vice President we will ever have,” he said.

For the first time in more than three decades, the country would have a President and Vice President working as a team, Romualdez, one of the campaign managers of Duterte, said.

“I am fortunate to have seen, up close, the dynamics between President-elect Bongbong Marcos and Vice-President-elect Inday Sara Duterte. Their relationship is one of mutual respect and one guided by the duty to serve the Filipino. This energetic tandem, I am sure, will work hand-in-hand to help improve the living condition of our people,” he said.

He emphasized that the May 9 elections were a “triumph of democracy, the power of one’s vote and the voice of the majority.”

He thanked all those who participated in the electoral exercise, including teachers and policemen, barangay officials, volunteers, campaign staff, the media, watchdog groups, and “millions of nameless and faceless Filipinos who made sure that the voice of the people reigns supreme.”

Romualdez cited the victors for their “magnanimity” and their opponents for their “graciousness.”

“Their conduct and demeanor in the campaign as well as their acceptance of the will of the people made the just concluded election one of most peaceful and orderly ever,” Romualdez said.

Romualdez said he was happy that after two years of community quarantine and lockdowns, Filipinos could gather again – “to see old and new friends, to hug family and loved ones, to commune as one people.”

He urged them to praise and thank the Lord for the “gift of life.”

“Each one of us here today is a survivor of the worst pandemic in modern times. We never thought that we will make it through this far. Salamat sa Panginoon sa pagbibigay sa atin ng panibagong buhay.

We have lost loved ones, though, along the way,” he said.

The House leader then called for a minute of silent prayer for those who lost their lives to coronavirus disease 2019 (COVID-19).

MARCOS, DUTERTE GIVE WARM GREETINGS TO ROMUALDEZ ON DAY OF OATH-TAKING