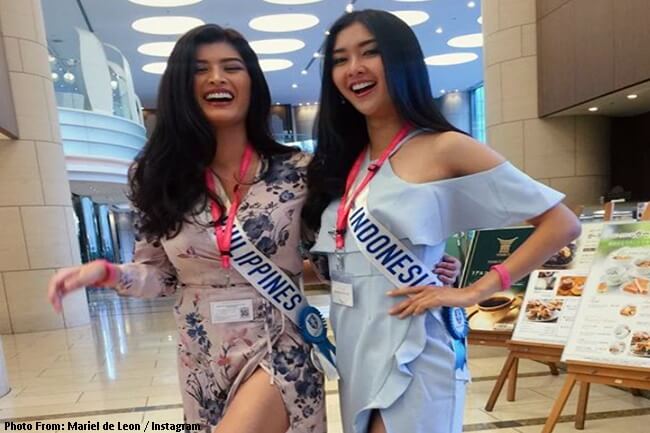 Ito sana ang back – to – back win para sa bansa.

Konnichiwa! Tomorrow is the day! This whole experience (from my first time joining BBP 2013 to BBP 2017 and now MI 2017) has been such a long and wonderful journey. I loved every moment of it; the good and the bad. It has made me a stronger, wiser, and empowered woman. More than I thought I ever could be. It has taught me to push my limits, to break down walls, to fight harder, to take risks, and to be courageous. I am proud of the woman I have become. I am proud to be able to break down stereotypes and inspire people to be themselves. But I still have a long way to go. I wouldn’t have come this far without the memories I’ve made, the mistakes I’ve learned, and the people who have supported me all the way. I would like to thank all the people who have been with me throughout this whole journey. You know who you are. I have been receiving so much love and support not only from Filipinos, but also supporters from all around the world. May God bless your kind hearts! To my family, I love you all so much! You have had my back since day 1, through all the good and bad. I can definitely say that I have the most open, loving and supportive family in the whole world! And I know that just by me coming this far and fighting this hard, you are all already so proud of me and THAT IS ALL THAT MATTERS TO ME. I will not be afraid because I trust God and His plans for me, WHATEVER THEY MAY BE. God has given me a crown in my heart and that is better than any other crown in this world. This fight is not only for me, not only for my family, not only for the Philippines, but most importantly it is for GOD. To God be ALL the glory! Thank you! Salamat po! Domo arigatou gozaimasu! #MissInternationalPhilippines #MissInternationalPhilippines2017 #MissInternational #ミスインターナショナル #MissInternational2017 #ミスインターナショナル2017