BBM-SARA GETS ENDORSEMENT FROM PETILLAS OF LEYTE 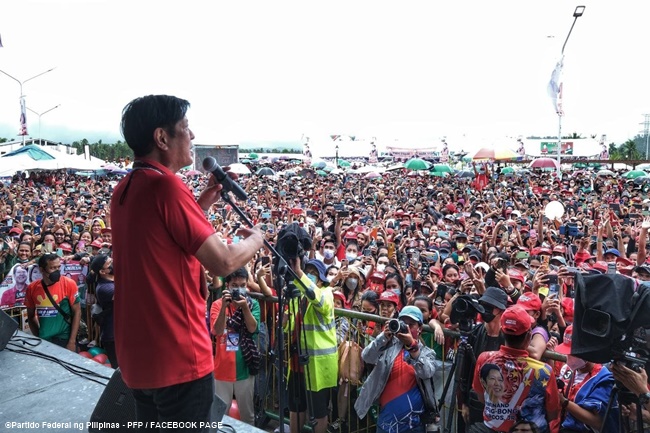 Lakas-Christian Muslim Democrats (CMD) and Hugpong ng Pagbabago (HNP) chairperson Davao City Mayor Sara Duterte have notched the support of the Petilla clan, one of the politically-influential families of Leyte.

The support of the Petilla family, led by Gov. Leopoldo Dominico “Mic” Petilla, was officially pronounced during a rally at the grounds of the Baybay City Convention Center here that was attended by Marcos and UniTeam senatorial candidates Migz Zubiri, Win Gatchalian, Larry Gadon, Herbert Bautista, and Robin Padilla which drew a massive crowd of jubilant supporters despite heavy rains.

officials led by Petillas for supporting the UniTeam candidates.

Governor Petilla was joined by his brother, Carlos Jericho Petilla, who is running under the PDP-Laban to succeed him, and other local officials of the province in endorsing the BBM-Sara candidacies.

The jampacked rally was preceded by the UniTeam tandem’s meeting with the Petillas and other local officials and leaders of Leyte, also at the Baybay City Convention Center.

Following the campaign rally, the Petilla clan hosted a lunch for Marcos and Duterte as well as the senatorial candidates running under the UniTeam.

Leyte’s support to the UniTeam tandem followed the official endorsement of Governor Damian Mercado, Vice Governor Christopherson Yap and other local officials of the neighboring province of Southern Leyte of the presidential and vice presidential candidacies of Marcos and Duterte.

The leaders of the two provinces said they consider Marcos Jr. and Mayor Sara as Leyteños.

Gov. Petilla welcomed the UniTeam candidates to his province.

“It is my honor to welcome ang ating mga bisita ngayon headed by no less than ang ating President Bongbong Marcos. Sir, welcome,” he said in front of a big crowd that braved the rain and bad weather to attend a UniTeam rally at the Baybay City Convention Center grounds.

For his part, candidate for governor Jericho Petilla said Leyteños showed up for the UniTeam rally despite the rain.

He said they should not only support the BBM-Sara tandem but should convince others as well to do likewise and vote for UniTeam on May even if it rains again.

BBM-SARA GETS ENDORSEMENT FROM PETILLAS OF LEYTE was last modified: April 11th, 2022 by DWIZ 882