80% of BBM, Sara voters are very firm; will not change their minds anymore—Publicus Asia 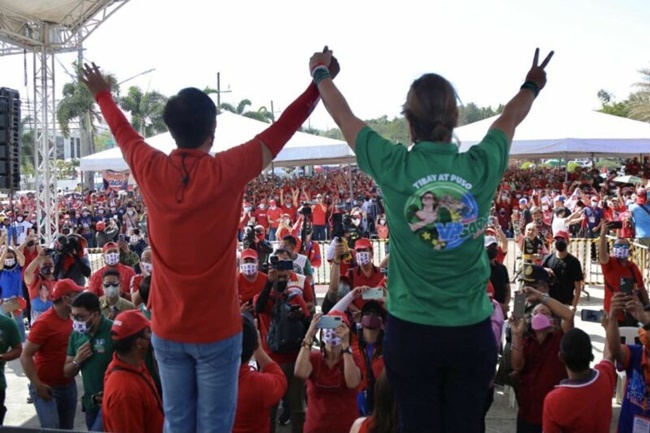 WITH barely more than a week before the May 9, 2022 national polls, the Publicus Asia has found out that 80 % of supporters of presidential frontrunner Ferdinand ‘Bongbong’ Marcos Jr., and his running mate Inday Sara Duterte have already made up their minds and will surely vote for both of them.

The development prompted analysts to conclude that both BBM and Inday Sara could well be on their way to victory.

Marcos, cemented his huge lead against his rivals after posting a 57% voter preference in the April 19-21 survey conducted by Publicus Asia Inc., while Duterte scored 59 percent.

“Another of point interest if we look closely at the numbers is that the share of the firm BBM (Marcos) voters rose from 70 percent in February to 80 percent in late April,” Yap said.

“Similarly, the share of very firm Sara voters rose from 75 percent in February to 80 percent in late April,” he added.

Yap explained that based on history, as the election is approaching the voters become even more convinced of their candidates.

“I think it is something that all of us voters can attest to that as election date nears we firm up our support, we firm up our preferences and we become more and more committed to the choices that we have made thus far,” Yap explained.

“It’s a very common occurrence among voters that as election day nears, they become more and more convinced of who they are voting for,” he continued.

The fieldwork for the non-commissioned PAHAYAG National Tracker survey of Publicus Asia was conducted from April 19 to 21, 2022, and utilized 1,500 respondents from a panel of 200,000 Pinoys.

Marcos is still 36 percentage points ahead of Leni Robredo, who even saw a 2% decline with her measly 21% voter preference.

At far third is Isko Domagoso, who is also in a virtual tie with the undecided voters at 6% voter preference.

Marcos also enjoys significant support from Pinoys in all economic classes, with 50% in Class ABC, 60% in Class D, and 73% in Class E.

80% of BBM, Sara voters are very firm; will not change their minds anymore—Publicus Asia was last modified: April 27th, 2022 by DWIZ 882