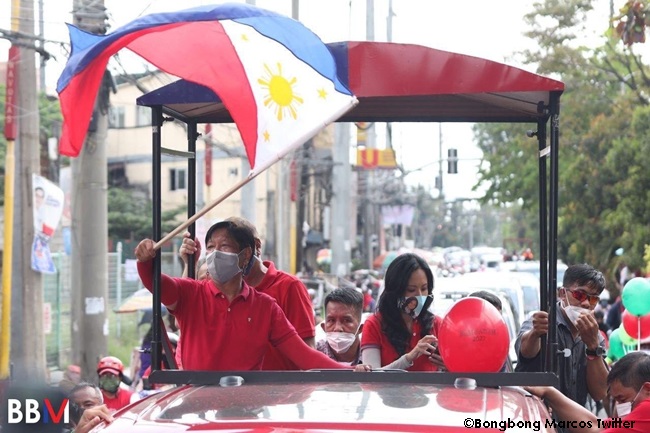 REGIONAL directors and district officers of the Bureau of Internal Revenue (BIR) nationwide have come out and declared that the heirs and administrators of the late President Marcos’ estate cannot be compelled or sued in court for tax evasion, even if they failed to pay the more than P203 billion tax assessment on the latter’s assets.

In what could be a direct rebuff to previous statements of former SC Justice Antonio Carpio and presidential wannabees Isko Domagoso, Manny Pacquiao, Leni Robredo and others, the BIR officials explained the estate tax is levied on real and personal properties of a dead person and not on the assets owned by his relatives.

To recall, Carpio and rivals of presidential frontrunner Ferdinand ‘Bongbong’ Marcos were all over the news in the past days, claiming that he and his relatives were accountable for not paying the P203-B estate tax, in obvious ploy to misdirect and paint him in a bad light and derail his imminent win in the fast-approaching scheduled May 9 elections.

“I can’t recall of any individual being sent to jail for non-payment of the said tax,” one of the regional directors said in an interview with Manila Bulletin.

The Supreme Court (SC) apparently agrees with the BIR official by saying that it is the estate which is liable to pay the taxes and not the heir or heirs.

“In the case of notices of levy issued to satisfy the delinquent estate tax, the delinquent taxpayer is the Estate of the decedent, and not necessarily and exclusively, the petitioner as heir of the deceased. In the same vein, in the matter of income tax delinquency of the late president and his spouse,  petitioner is not the taxpayer liable.”

Furthermore, the officials explained that the proper thing to do under the Tax Code and revenue regulations is to seize and sell in public auction the properties of the deceased to settle the indebtedness.

“That is what we have been doing for years since the death of the former strong man, but the problem nobody was interested in buying them,” the official added.

The officials also answered allegations against them that the bureau has been negligent in collecting the said estate tax.

They added that when Marcos died in 1989 the revenue examiners fixed his estate tax debts at P23 billion.

The deficiency tax sharply rose to more P203 billion due to the one-time 50 percent surcharge and 20 percent yearly interest.

“It’s not a coincidence that rivals of presidential frontrunner Bongbong Marcos are raising this matter in unison a few weeks before the elections, sadly this is all about politics,” one of the BIR officials said.

Earlier, the camp of presidential frontrunner Ferdinand ‘Bongbong’ Marcos Jr., assailed the “gutter politics” of his rivals explaining the said case is still pending in court.

“Our rivals are misdirecting everyone by claiming that the case has attained finality when the truth of the matter is, it is still pending in court and the ownership of the properties in litigation has yet to be settled,” said Atty. Vic Rodriguez, spokesman and chief of staff of Marcos.

“That being the case, the fair and just tax base to be used in computing the estate tax cannot yet be established with certainty,” Rodriguez added.

10 more governors back Marcos; vow to help in vote protection